Drummondville sweeps the Battle of the 55 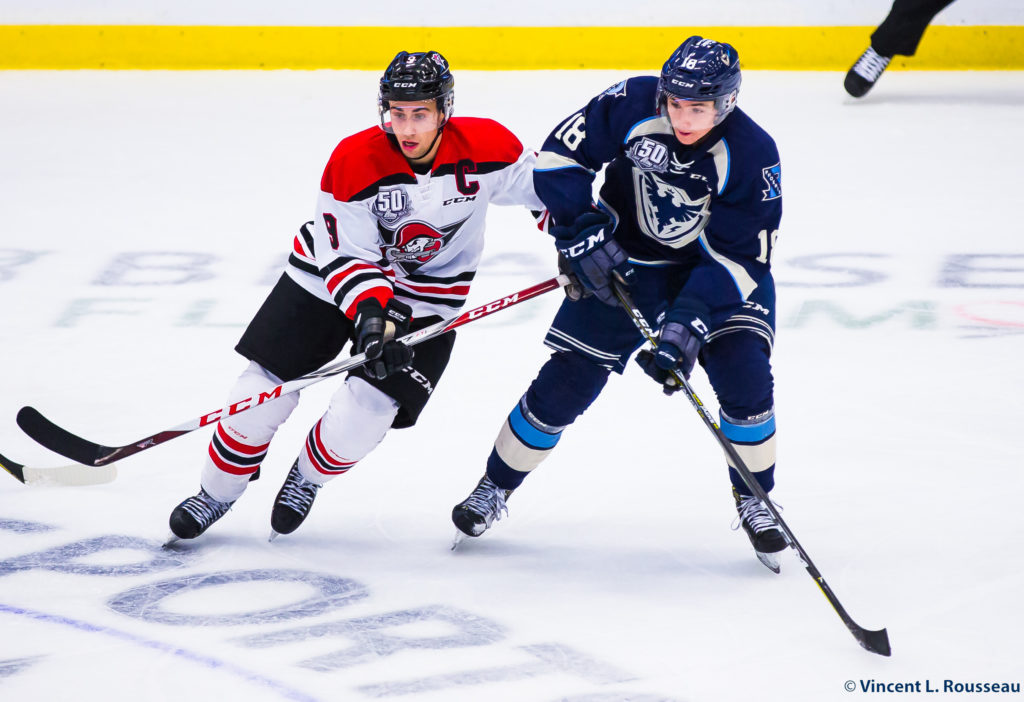 Sherbrooke, Que. – Drummondville won the special teams battle which ultimately won them the game this afternoon at the Palais des Sports Léopold-Drolet. After going 0 for 6 on the power play on Friday night at home vs the Phoenix, the Voltigeurs cleaned things up, scoring three goals on the man advantage en route to a convincing 6-2 victory over the Birds. The Volts were efficient in their attack as they tallied six goals on only 24 shots. Drummondville netminder, Olivier Rodrigue, was solid once again, stopping 33 of the 35 shots that came his way.

Gregor MacLeod opened the scoring on a 2 on 1 just past the midway point of the first period. Shortly after, the Russian native Pavel Koltygin scored his first of two goals on the afternoon on the power play, putting Drummondville up 2-0. Late in period, Taro Jentzsch found himself in all alone on Rodrigue and beat him through the five-hole for the shorthanded marker, getting the Phoenix back in the game. It was Jentzsch’s second shorthanded goal of the home-and-home series. The Volts were quick to respond however, as Cédric Desruisseaux scored what turned out to be the game winning goal just a minute later. Bobby Dow had a great opportunity to pull the Birds back within one late in the period, but Rodrigue made a brilliant stop, keeping the game at 3-1.

The Phoenix caught a bad bounce to start the second when Drummondville’s Pavel Koltygin banged one off a defender and into the net from a seemingly impossible angle. Later in the frame, Xavier Simoneau sprung free but was pulled down by Phoenix defender Jaxon Bellamy, resulting in a penalty shot. Simoneau showed great patience on the play and beat Brendan Cregan through the legs, to the delight of the Voltigeurs fans who made the trip down route 55. The Birds out shot the Volts 14-6 in the second but were unable to find the back of the net.

After being called up from the Chambly Forts in the Quebec Junior AAA Hockey League, Alex Brousseau saw action for the first time in his QMJHL career. The 17-year-old came in to replace Brendan Cregan to start the third period for the Phoenix. 1:40 into the final frame, Nathael Roy found Alex-Olivier Voyer in the slot, who fired one past Rodrigue, giving the Phoenix faithful hopes of a comeback. Those dreams were put to bed though, when the highly touted Detroit Red Wings prospect, Joseph Veleno, scored to make it 6-2 in favor of the Volts and that is how this one ended.

The talent and depth of the Drummondville Voltigeurs was on full display during this rivalry weekend and it proved to be too much for the Phoenix to handle. The Volts were without their star forward, Maxime Comtois, who has seemingly found a new home with the Anaheim Ducks. Comtois has registered 7 points in his first 10 NHL games.

The Phoenix will be looking to get back to their winning ways when they take on the Rouyn-Noranda Huskies at 7:00 p.m. on Friday, November 2nd, at the Palais des Sports Léopold-Drolet.

2019 Playoff Blainville-Boisbriand Armada
Phoenix eliminate Armada to advance to Round 2!
11 months ago