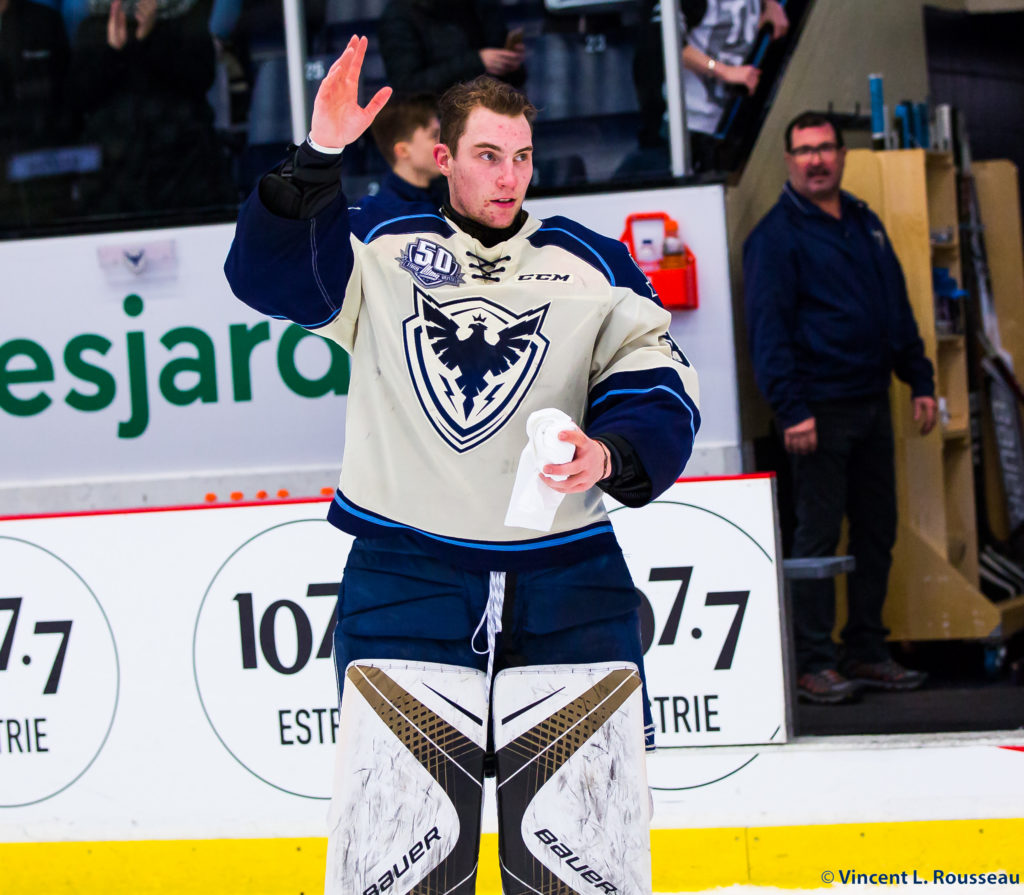 Sherbrooke, QC. – New year, same result. On December 30th, Sherbrooke beat Victoriaville 3-0 in one of their final home games of 2018. Less than two weeks later, they returned home for the first time in 2019 looking for the same result. With the help of newcomers, Dakota Lund-Cornish and Michaël Kemp, they got it. The Phoenix battled hard during this midweek face-off with the Tigers and came out on top by a score of 3-1.

Changing teams is no easy task. Adapting to a new city, new home and new system mid-season? Even harder. Well, Dakota Lund-Cornish and Michaël Kemp have made it look easy so far. Since coming over from the Charlottetown Islanders, Lund-Cornish has two wins in two games. Kemp’s transition into the Phoenix lineup was equally impressive, as he picked up a beautiful assist on the game winning goal, earning him the first star of the game. Their new head coach, Stéphane Julien, praised their efforts.

“In Dakota’s case, he made some big saves at big moments which is what we look for in a goalie. In Michaël Kemp’s case, he made a great pass to Poulin on the second goal. I think both players made great first impressions, they have adapted to the group quickly. I think for Dakota there are some things to prove and he will get his chance. For Michaël, we saw his experience, he’s a guy that defends well and has a great first pass, so it will just reassure our defence a little bit,” said Julien.

Jordan Brière went off for tripping at 8:53 of the first. On the ensuing power play, Benjamin Tardif threw one toward the front of the net, where the puck hit off a Victoriaville defender and trickled past Fabio Iacobo. Brière made up for his mistake toward the end of the period however, beating Lund-Cornish in between the legs for the Tigers’ only goal of the night.

To wrap up a physical first period, Bobby Dow and Anthony Poulin dropped the gloves for an animated tilt. Both players were letting the fists fly before Poulin registered the take down.

The second period saw little action. Both the Phoenix and the Tigers did a good job at shutting down the middle of the ice, limiting any high danger scoring opportunities.

In the third, Samuel Poulin broke the deadlock, redirecting a perfect pass from Michaël Kemp past Iaboco. From there, the Tigers had few chances to pull even, as the Phoenix outshot them 13-4 in the final frame and 31-17 in the game. Poulin added another into the empty net with 0:59 left on the clock, leading the Phoenix their first home win of 2019.

The Phoenix pay a visit to Rimouski for a showdown with the Océanic on Friday night. Only one point separates the two teams in the standings.